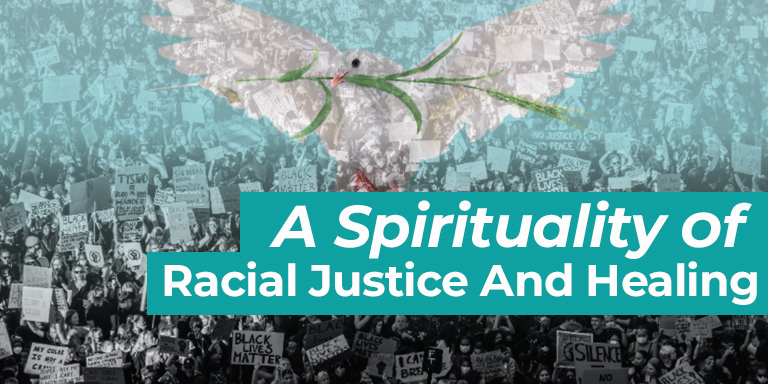 In this ongoing series we reflect on the spiritual truths and principles that undergird the fight for racial justice, the Spirit that animates the fight and the spiritual practices that will sustain us in this very human struggle. No one post will be the full word or the last word, but taken together, diverse voices will seek to illuminate a spiritual path forward. At the end of the post, as always, we feature “one of our own” and the righteous actions they are taking in their own setting. 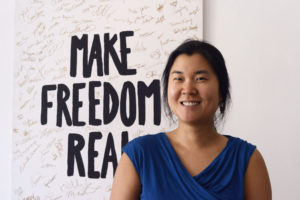 Late on the night of March 16, my boss texted asking if I’d seen the news about the shootings in Atlanta. I started reading, my distress deepening as the media updated from four victims to eight, from unknown people to seven women—six of whom were Asian, including four Koreans. These victims look like me, I thought as I sat alone in my kitchen.

Over the last week dozens of news outlets, podcasters, and friends reached out to Restore NYC, the Christian anti-trafficking nonprofit where I work, with a pressing question: were the shooting victims at the Atlanta spas being trafficked? While there is still not enough information to determine if they were, the question left me wondering how the answer would change anything about the victims’ humanity. Does the violence, racism, and misogyny they regularly experienced become excusable if they were there willingly instead of by force?

Too often only those in power receive the benefit of complexity. Law enforcement and the media search high and low to better understand the shooter. Was he racist? Was he an addict? Was he religious? What kind of day was he having before committing violent murder? In the swirl of speculation lie the victims. Nameless. Faceless. Without families, communities, or motivations.

As the solidarity hashtags stop trending and the news reports move on to a new mass shooting, I know that I need to process the events in Atlanta as an Asian-American woman, not just as a Restore NYC employee. So I ask myself the question that, as I’ve learned from my two years in Transforming Community, always has an answer: What is the invitation God is extending? This time, as many others, the invitation is to lament.

An Invitation with Provision

And because the Lord always pairs the invitation with provision, in my moment of personal grief a former colleague emails me saying, “I wrote a thing”:

We lament the shooting deaths on March 16.
We cry out from Atlanta to Asia, from the parlor to the province.
The temptation to flee is fierce, but we pause as a protest, and hold fast in this moment of incredible pain.

Grasping for breath through a river of tears.
Searching for words through a clouded mind.
Bearing the weight of many faces crowding our hearts.
Longing for home. Longing for a home.

Yet we choose the discomfort of slowing down, to name, to touch, and to comb the depths of our sadness, anger, and fear.

Anguish for the violent theft of innocent Asian lives.
Anger towards everyone and everything all at once.
Fear of being targeted.
Fearing men armed with ignorance and a gun.
Feeling disposable.
Because of the size of our eyes, the color of our skin, and the shape of our bodies.

Are we not human? Do you not see us? What else must we suffer? How long must we endure?

My former colleague ends the lament, “May this tragedy never be forgotten. And may our moment to mourn not be missed.”

To my AAPI sisters and brothers, this is our moment in more ways than one. In the reckoning, rage, and reeling, may we remember to lament, even as we march toward that day when God will make all things new.

Elizabeth Kim (TC15) is the chief operating officer of Restore NYC, an anti-trafficking organization in Manhattan specializing in housing and economic-empowerment solutions for survivors of trafficking in the United States.

ONE OF OUR OWN

In each post in this series we will highlight Transforming Community Alumni and the righteous actions they are taking on the journey towards racial justice.

In this post we are pleased to feature Restore NYC, a nonprofit organization making freedom real for survivors of trafficking in the United States.

Transforming Center’s board chair, Jimmy Lee (TC11), was founding board chair and then executive director at Restore NYC for seven years. Amanda Eckhardt (TC14) serves as the current executive director, along with Elizabeth Kim (TC15) their chief operating officer, and Beck Sullivan (TC17) their senior director of programs. Their entire board has been shaped by attending the Pursuing God’s Will Together Summit for Leaders as they have incorporated the practice of corporate leadership discernment into their life together for the sake of others.

Restore NYC’s vision is a world free from trafficking — for every survivor, a life of hope, restoration, and flourishing. Watch the video below to hear from a survivor graduate of Restore’s services.

On April 8th at 7:30pm ET, Restore NYC will host a panel with Diane Langberg and Boz Tchividjian among others on the topic of Abuse of Power: How the Church Can Respond. Further information and register for free here.

Thank you for sharing this story, for the honesty that we need to lament!

Elizabeth, what a beautiful lament you have shared with us. I married into a Chinese family and as a white person, I never felt the fear of racism and the fear of being attacked so much as I did this past year.

I shared your poem with my in-laws and it meant so much to them. I’m so grateful for you and your ministry in bringing us back to that holy question of Gods invitation. Grateful you took us along your journey of processing this awful tragedy.

Thank you, Elizabeth, for leading us in lamenting this terrible loss of life and the racial and gender discrimination that motivated it. My own distress deepened as information about the shooter emerged and the intersection of race, gender, sexuality AND religion became clearer. Apparently the shooter claimed to be a Christian, was a baptized member of a Protestant denomination and the shooting, he told police, was an attempt to “eliminate temptation.” The idea that the only way to eliminate temptation is to find a way to eliminate the women rather than dealing with himself is a tale as old as time, fostered by faulty theological perspectives and teachings on men, women, and sexuality. The fact that the Church’s teachings and perspectives on these things (or the lack thereof) may have contributed to such tragic outcomes is almost more than I can bear. I and we join you in this lament and pray that we might also listen to God for what is ours to do in response.

Thank you for writing and sharing this. I join your lament.

Glad and grateful to lament together <3

Are there scripture passages or stories in scripture that support the phrase “ with an invitation from God comes provision “. I am eager to process this statement future.

I was thinking about when the ravens fed Elijah as he was running away after killing all the prophets. The invitation from God could have been to stop, rest and listen.

Or maybe the widow whose flour and oil didn’t run out after she accepted the invitation to help Elijah in spite of her own desperate poverty.

I’m sure there are more – these just came to my mind!

Hi Rebekah. When I wrote that line it was backed by my own experience as well as Scripture. A couple others in addition to what Alayna shared are the feeding of the 5,000 — Jesus tells them to feed the hungry masses and then provides the miraculous bread and fish — or Moses’s calling to lead the Israelites out of Egypt and being provided with Aaron’s help, the 10 plagues, and splitting of the Red Sea. Of course Jesus himself is an example too — his incarnational life was filled with hardship but God met and provided for Jesus at every step, from mornings on the mountain in prayer to strength in Gethsemane and every miracle he performed.

Alayna, the widow’s oil from 2 Kings is one of my favorite scriptures in the Bible. I wrote my law school application essay on it. Thank you for that lovely reminder.

Thank you for sharing your thoughts and these powerful and beautiful words of lament. Praying this morning for racial justice and healing and grateful for organizations like yours who are serving God in a ministry of reconciliation.