Pursuing God’s Will Together: When the Resurrected Christ Leads His Church

One great need of the church today is to experience the dynamic leadership of Christ as its Head…This is the most striking implication of one’s belief in the resurrected Lord.  If Christ is alive, he desires to lead his church.  If Christ desires to lead his church, his will should be sought. If his will can be sought, it can be discerned; and if it can be discerned, it deserves to be obeyed.  This is nothing more than the basic Christian life.”
– Paul Anderson

The leadership team of Grace Church* wanted to begin learning how to discern God’s will together as they made decisions regarding their church. They were part of a large, well-established church in a busy suburb with a passion for becoming a gathering place for spiritual seekers.  And their vision had become reality!  They had assembled a top notch team of individuals who were gifted and experienced and they wore cool jeans. Most of the leaders in the church did not have any formal training for ministry, but they were alive with innovative ideas, bright minds, and a passion for Christ.  Through a variety of life experiences and marketplace opportunities, they knew how to develop and market their ideas and implement them with excellence.

The elder board was made up of leaders experienced at running successful businesses through good strategic planning and sound financial practices. There was an attorney in the mix to make sure they always had good legal counsel and a brilliant strategist who had come to Christ through this church and was brimming with ideas about how to “take it to the next level.” Since these individuals were well-connected and had been successful in their careers, they had the funds to back their plans and visions and found it deeply fulfilling to connect their financial successes with the opportunity to fund such a significant spiritual endeavor.

What had started out as a small group of families with a shared vision had now mushroomed into a congregation that numbered around two thousand in attendance on Sundays, in addition to many from the community who were benefitting from their wide array of ministries.  They had been able to purchase a large warehouse which they had renovated into a multipurpose space used for worship as well as housing the many ministries that kept the place bustling with kingdom activity seven days a week.  On the surface, it was all good.

Beneath the surface, however, there were other realities that needed attention.  The staff was exhausted from continually trying to meet the needs of the community in ways that were bigger and better. One of the founding members had experienced a moral failure and although appropriate disciplinary action had been taken, there had not been open communication with those close to the situation. Since he and his family had left the church abruptly, many were still grieving the loss of their friend and colleague.

In addition, there had recently been a disagreement among the elders about purchasing a piece of property and expanding the ministry. This had created two factions in the congregation, one of which eventually left, bought the property, and started another church several miles away. Public statements about how this would “expand the work of the kingdom” did little to heal the disillusionment among those who had been caught in the relational crossfire.

There were stress cracks between the elders and the staff as relationships became more and more hierarchical and business-like. The staff felt the elders wanted to see more bottom-line growth (attendance, offerings, new and innovative programs) but they weren’t convinced that the elders really knew what it took to pull this off.  The elders were now asking the question about whether they had “the right people on the bus” to pull off the growth they were envisioning. Staff members were aware of conversations in which people’s leadership “capacity” was being questioned and were afraid of being fired.

The senior pastor, the only staff person who was also an elder, carried the weight of being the one who continually represented the two groups to each other; this often resulted in miscommunication and misunderstanding. All of these dynamics created a prevailing mood of fear and uncertainty. Although staff and elders rarely got together as a group, the interactions they did have were characterized by posturing and maneuvering.

Several staff marriages were stressed due to pace of life issues and unresolved tensions.  Those who were observant noticed that they attended fewer and fewer events and when they did, they were aloof and guarded. Things were still going well externally, but there were aspects of the church’s life where real wisdom was needed. How were they to clarify what the real questions were, let alone discern God’s will relative to those questions?

This is only one kind of situation in which a leadership group might realize they have reached the limit of what human wisdom has to offer. Something is not quite right. They realize the methods they have used to make decisions in the past are not adequate for what they are facing now.  Everyone is running so hard and so fast that no one has time or space to listen to God.  Even though they may have discerned God’s will in the beginning to get the whole thing started, somewhere along the way something shifted.  As things got larger and more complicated (or remained small and still became complicated!), they relied more on the wisdom of “the experts” than pursuing a mutual commitment to discern and do the will of God together. They might even have elevated leaders who were wise by human standards but were ill-prepared for spiritual discernment. 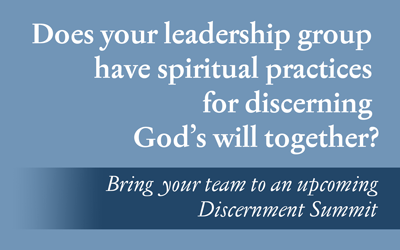 It could also be that everything is just right and yet the leadership group is facing important and far-reaching decisions—such as expansion of the physical plant, adapting a multisite strategy, or making an important new hire—that require real discernment rather than just pressing forward based on their own thinking and planning. How does a group of leaders become a community that is able to discern and do God’s will together in a variety of situations that require the wisdom that comes from the living Christ?

Oftentimes when individuals are invited to serve as elders, deacons, or board members in churches and ministry organizations, the definition of spiritual leadership is assumed or (at best) it is very general; the expectation for what spiritual leadership actually requires from the individuals involved is unclear and ill-defined. That is why it is essential to establish a Biblical understanding of discernment as the heart of spiritual leadership, as well as making an honest assessment of any obstacles that might be present. Then discerning and doing God’s will together becomes the group’s “true north” so they can explore an actual process for corporate leadership discernment.

Eastertide is an excellent time to consider whether or not we are allowing the living Christ to lead his Church.  As we continue to live into the truth of the resurrection, let us ask ourselves brave questions about whether or not we as leaders have practices in place that enable us to pursue His will together rather than our own. As Gerald May writes:

“The question is deceptively simple to ask and exquisitely difficult to answer: Am I truly seeking to do Thy will…or mine?”

*Grace Church is a fictitious church representing a composite of experiences the author has had in a variety of church and ministry settings.   The story of how their staff and elders become a community for discernment is told more fully in Pursuing God’s Will Together: A Discernment Practice for Leadership Groups.

Ruth Haley Barton (Doctor of Divinity, Northern Seminary) is founder of the Transforming Center. A teacher, spiritual director, and retreat leader, she is the author of numerous books and resources on the spiritual life including Pursuing God’s Will Together, Strengthening the Soul of Your Leadership, Sacred Rhythms, and Invitation to Solitude and Silence.

(Doctor of Divinity, Northern Seminary) is Founding President and CEO of the Transforming Center. A teacher, seasoned spiritual director (Shalem Institute), and retreat leader, she is the author of numerous books and resources on the spiritual life including Life Together in Christ, Pursuing God’s Will Together, Strengthening the Soul of Your Leadership, Sacred Rhythms, and Invitation to Solitude and Silence.

Get the Beyond Words newsletter delivered straight to your inbox.

This form needs Javascript to display, which your browser doesn't support. Sign up here instead